people are looking at this product right now.

L-tryptophan is an exogenous amino acid (otherwise necessary), i.e. one that must be supplied to the body because it cannot produce it by itself. Tryptophan plays a very important role in the central nervous system because it is converted to serotonin and melatonin .

Tryptophan is a precursor in the synthesis of serotonin and melatonin. Serotonin is a biologically active substance; is an important neurotransmitter that is responsible for the presence of emotional states (e.g. anger, good mood, sleep) and sexual behaviour. So our well-being depends on the presence of serotonin. In contrast, melatonin, which is secreted during sleep, is responsible for the occurrence of circadian rhythm and biological clock. Is often referred to as the "sleep hormone".   The conversion of tryptophan to serotonin and melatonin takes place only in the central nervous system.

L-tryptophan is potentially the best amino acid you can get for a decent night sleep. The other thing about L-tryptophan that many do not notice is that because its an essential amino acid and we dont synthesise it naturally in the body, it does need supplementing. This essence nutrition version is the best I have used in terms of efficacy, it really does work. Great way to use seratonin to drift you into a better sleep and a deeper sleep and wake up refreshed rather than groggy

The cost of delivery is calculated at checkout.

We are currently unable to deliver to Northern Ireland due to Brexit/COVID. The aim is to get this resolved as soon as possible (the paperwork is set to be finalised over the next couple of weeks). Thank you for your patience.

What are you looking for?

10 Minutes Ago From Leicester

Let customers speak for us

If you want to buy quality product, gymrat is highly recommended. This is the one stop shop to buy high quality vitamins and enzymes . My item came nicely sealed and the packaging was great. Delivery was done as promised. 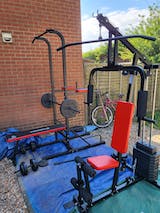 I used to have this product when I had my high school final EXAMS and really made a difference as helped me to study at steady pace, staying focused for longer periods of time.
I tried after 20 years when I need it to finalise my Degree exams and the result was the same…
This product is helping me to focus, avoiding distractions when much needed, enhancing my learning experience.
Highly recommended!

Good and solid build look forward to testing them properly, just remember to check size it's about the size of a small round shield.. only issue is the grip being plastic tubing.. I've wrapped in hockey tape and helps alot